The Day My Kisses Tasted Like Disorder: #Romance #Poetry by Emmanuella Hristova

Emmanuella Hristova was born in Oakland, California and grew up in the Bay Area. She is the third daughter to Bulgarian parents who immigrated to California shortly before she was born. She began drawing at the ripe age of four and studied the fine arts for five years in high school. There, she received many art accolades including a Congressional award for her piece Boy in Redin 2009. In 2015, she received her Bachelor of Arts in Linguistics from the University of California, Berkeley. She began writing poetry at age twenty-four when she was in graduate school. She earned her Master's in Education from the same alma mater in 2017. Emmanuella spent two years as an English teacher in Richmond, California. During that time, she self-published her first poetry collection: The Day My Kisses Tasted Like Disorder. Two of her poems have been published in For Women Who Roar and another will be published in an anthology by Wide Eyes Publishing. Currently, she is writing her first novel. 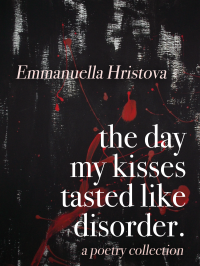 "The Day My Kisses Tasted Like Disorder" is a collection of poems that explores a tumultuous year of love, heartbreak, and all kinds of unimaginable loss. Emmanuella's debut poetry book documents the birth and death of a college relationship, and the death of her sister. Each poem is an emotional time-stamp that plunges the reader into the depths of the author’s feelings as they burgeon and wane. The book reads like a diary and chronicles the boundaries of the things that we all feel: passion, heartache, and pain that gives way to hope. It concludes in a message of empowerment for all women, offering a redemptive quality to a masculine world where women are pushed to the sidelines.