The Stone of Mercy (Book 1 of the Centaur Chronicles) by M.J. Evans 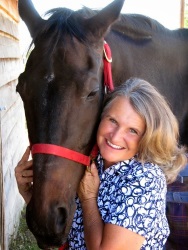 I am a graduate of Oregon State University. Upon graduation, I spent five years teaching at the middle school and high school levels.

About twelve years ago, I was able to combine my passion for horses with my love of writing. I researched and wrote three equestrian trail guide books for the Denver area. By “research” I mean that I spent every Friday riding my horse on a new trail, be it on the plains or in the mountains. The result of that work was the publication of "Riding Colorado-Day Trips from Denver with Your Horse," "Riding Colorado II," and "Riding Colorado-Day AND Overnight Trips with Your Horse." All of these books have made my horse famous! 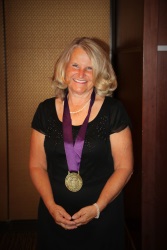 I have also written another award-winning fantasy titled "North Mystic" published by Black Rose Writers. This allegory of the Revolutionary War won first place in the Purple Dragonfly Awards for fantasy in 2014.

In 2016, I released, In the Heart of a Mustang. This story is not a fantasy but it is all about horses. This coming-of-age young adult novel has won the 2016 Gold Medal from the Literary Classics Awards in Young Adult General Fiction and the Silver Medal in the Nautilus Awards.

My current project is a four-part series titled “The Centaur Chronicles”. I am excited about this new middle-grade fantasy. The first book, “The Stone of Mercy,” was released on Oct. 1, 2016 and has received the Gold Medal/First Place award for Young Adult Fiction from the Feathered Quill Awards. 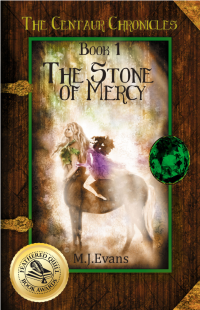 
Be it known throughout the land that The rightful heir to the throne of Crystonia will be the wearer of the Silver Breastplate with its four stones of light: The Stone of Mercy, The Stone of Courage, The Stone of Integrity and the Stone of Wisdom.

By tradition, the ruler of Crystonia will be the one in possession of the Silver Breastplate. Yet the rightful heir has not appeared and the throne that sits atop Mount Heilodius has stood empty for a century and a half.

The kingdom is being torn apart as the biggest and strongest races battle for control. Even the herd of peace-loving Centaurs has splintered into two factions, one awaiting the promised bearer of the breastplate, the other seeking power and control over the land.

Unbeknownst to all but a very few, the Silver Breastplate has been created. In due course, it is presented to a sixteen-year-old Duende girl named Carling, one of the tiny descendants of the fairies that once filled the land. But the silver breastplate is not complete. In order for its wearer to have the skills to rule the land righteously, the young Duende needs to find the four stones of light that are needed to finish this magical source of power and authority.

This is the riveting story of Carling’s quest. She, along with her friends, must risk their lives to save their land and fulfill the assignment given to them to complete the silver breastplate.

Award-Winning Author M.J. Evans takes the reader on another fantastic adventure. Immerse yourself in her fantasy world of Centaurs, Cyclops, Ogres and the Duende.


The blacksmith’s foot expertly pumped the bellows as he turned the piece of iron first one way then the other in the bright orange coals. The glow emanating from the little forge provided the only light as the sun began its descent behind the western hogback. Intense heat caused bands of sweat to roll down the narrow patch of skin that separated the smithy’s thick black hair from his single bushy eyebrow. The long brow served as a miniature breakwater, sending the sweat to the right and left before releasing it to run down the sides of his round, puffy face in great droplets. None of this mattered to the Duende, who was accustomed to the discomfort imposed upon him by his chosen profession.

The strip of metal was now glowing brightly in the same shade of orange as the coals into which it had been thrust. Tightly clasping the iron with his fire tongs, the smithy pulled it from the forge and quickly turned around toward his anvil.

The shock of seeing the tall, thin, hooded figure looming over him caused him to drop the metal strip, sending it bouncing off his boot and leaving a burn mark on the leather toe. The metal clanged loudly on the ash-covered stone floor. His breath caught in his throat.

“I’m sorry that I startled you.” The deep, sinuous voice came from beneath the gray hood that covered the stranger’s head and concealed his face.

“I…I…I wasn’t exactly expecting anyone,” stammered Ashtic, the village’s only blacksmith. His heart pounding, he wiped his glistening forehead with the back of his sleeve, painting it with a streak of soot, then rubbed his hands on his scarred leather apron. “May I help you with something?”

“My name is Vidente and it is I who have come to help you and your race.” The stranger stood up even taller before continuing. “A queen is soon to be born who will bring peace to the land. She will be one of your kind. She will be a Duende.”

“A Duende?” echoed Ashtic in the squeaky voice typical of all the Duende, dubious that a queen could be chosen from his race.

The Duende were shy, quiet creatures, descendants of the fairies that once populated the land. Their features were fine, their ears pointed, remnants of their fairy heritage. They were known and respected as artisans who kept to themselves. They were also recognized for their intelligence coupled with wisdom, but had never been considered as the source for a monarch due to their small stature and peace-loving ways. Yet, no other race had been able to maintain the throne for longer than a decade, and now the land of Crystonia had been without a ruler for the past century and a half. For the same amount of time, there had been no peace in the land while the larger, stronger races battled for leadership. The Centaurs, Ogres, and Cyclops all wanted to conquer and maintain Mount Heilodius, the designated location of the empire’s seat of government.
Posted by Renee Scattergood at 2:00 pm