Everything is Better with a Cape by C H Clepitt 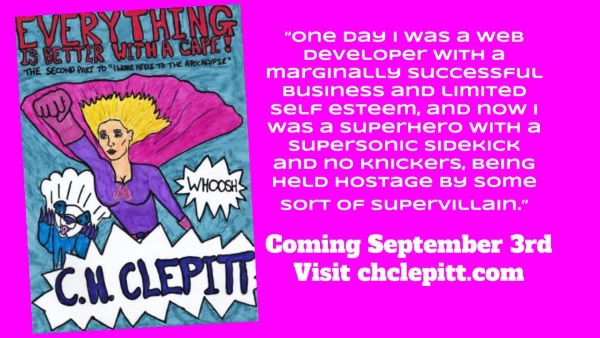 C H Clepitt has a Master’s Degree in English Literature from the University of the West of England. As her Bachelor’s Degree was in Drama, and her Master’s Dissertation focused on little known 18th Century playwright Susannah Centlivre, Clepitt’s novels are extremely dialogue driven, and it has often been observed that they would translate well to the screen.

Since graduating in 2007, she gained experience in community and music journalism, before establishing satirical news website, Newsnibbles in 2010. In 2011 she published her book, A Reason to Stay, which follows the adventures of disillusioned retail manager, Stephen, as he is thrust into village life and the world of AmDram. Clepitt’s feminist fantasy, The Book of Abisan not only crosses worlds, but confuses genres, and has been described as a crime drama with magic. She has often said that she doesn’t like the way that choosing a genre forces you to put your book into a specific little box, and instead she prefers to distort the readers’ expectations and keep them guessing. Her 2016 work, I Wore Heels to the Apocalypse does just that, as just like the characters, the readers won’t know what’s going on in this laugh out loud satirical scifi. 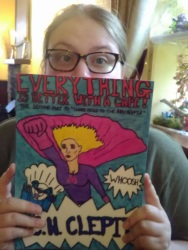 Having survived the apocalypse, Kerry is back to being a socially awkward web developer, but when apocalypse survivors start ending up dead, with her next on the list, events start to spiral out of control. Follow Kerry as she deals with life and fashion challenges, whilst trying to save the world in this hilarious sequel to I Wore Heels to the Apocalypse.


Why did you decide to be a writer?


I don't think I ever made the conscious decision. I have always had a very active imagination, and imagined stories in my head. The first time I wrote an entire book (as an adult) I actually dreamed it first! (I know, cliche, right?). I woke up on my day off with the entire first half of a book buzzing around in my head, so I grabbed a notebook and pen and started writing! That was it for me.

Did you have a hard time sharing your work with the public?


Back in the day (yes, I am indeed very old), there was a website called Authonomy, which was run by Harper Collins. It was basically a forum for authors to share their work, offer feedback to each other and improve. There was also a competition to get to the top of the pile, but I was never very good at badgering people to vote for me. What it did do was give me some great constructive feedback, and the confidence to know that my writing was good, and it wasn't just me who thought so, so I went ahead and published it.

Where are you from? Does your area have a good writing community?


I am from Bristol in the UK, which I'm sure probably does have a good writing community. I very rarely leave my cave though. My writing community is online, and I have made some amazing friends through writers groups and we all support each other with launches and feedback. I've even been known to leave the cave to meet some of them...


Yes. I work for a small local charity supporting people with all different disabilities gain access to the therapeutic benefits of horse riding. It is really rewarding and I wouldn't want to do anything else. I love going into work everyday, the team is like a big family, and the clients love coming in to see us. It's a really nice feeling when people are genuinely pleased to see you every day.


Lots! I don't like labels, but I appreciate people need them, so, here goes... fantasy, comedy, satire, sci fi... I also try to write diverse characters including LGBTQ, but that is NOT a genre.

Is there a genre that you've been wanting to experiment with?


I have been wanting to try a more classical style. My work is very dialogue driven and fast paced, and a part of me wants to prove I can do something different. I am trying it with my latest work in progress, so we'll see if the characters go for it.

What inspires you to write?


Everything. I am very political minded, and when I see social and political wrongs it makes me want to write, to show people creatively how I feel. Once a character is born in my head I have to finish their story, or they just sit in there shouting at me, which is noisy.

How often do you write?


At the moment I am writing daily. I am creating a fantasy serial with fellow author Samuel Z Jones, and in the evenings we manage at least 10k between us. We are releasing it as a magazine called Mantichore Magazine. You can find it on Facebook /mantichoremag. When we aren't working on that I find the time to work on my own projects too. I wouldn't want to be bored!

Do you have a daily word or page count goal?


No, I can't be that structured. The second I set myself a goal my creativity is stifled. I just write until I stop.

How long does it take you to write a novel?


It's not the writing that takes the time, it's the editing and revisions! I try to aim for one release a year, but it's tough, it needs to be right before you can let it fly free!

What is the quirkiest thing you've ever done while writing?


Inserted a talking badger as a spirit guide for one of my characters! I have no idea where it came from, but it is most people's favourite character, and the main reason that I wrote the sequel!

If you could be one of your characters for a day, who would it be and why?


Not sure I'd want to be any of my characters, they don't have a very happy time of it! Maybe Crew from the Crew Chronicles, on a day where he didn't have to fight anyone, or liberate slaves or anything! 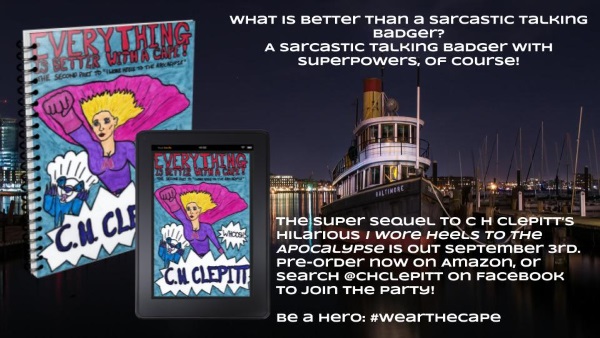