The Third Throne: Angel of Darkness by Tabitha Barret

Tabitha Barret graduated from Rutgers University with a BA in English. She married the guy from her Creative Writing class and together had two amazing children. They live in a quiet town in New Jersey with their three rambunctious dogs. She is currently working on her series, The Third Throne.

Michelle Black lives an average life, but she is not an average woman. Plagued by nightmares of Hell and the unusual ability to see the sins of men, she stands apart from those around her. Deceived by a voice controlling her mind, she finds herself trapped in the place of her nightmares, Hell.

The Angel of Darkness tells her that she must now serve him, and she is forced to face the Realms of Torture. Strange things begin to happen when she senses that she is meant to be more than just a servant. Will she learn the truth about who she is and what she is destined to become before it’s too late?

The Third Throne: Angel of Darkness is the first book in the steamy Urban Fantasy/Paranormal Romance series that introduces us to Michelle Black and her dark destiny. She must fight to survive in Hell as she searches for the terrifying truth about the darkness that resides deep inside of her.


Buy the Book on Amazon Now 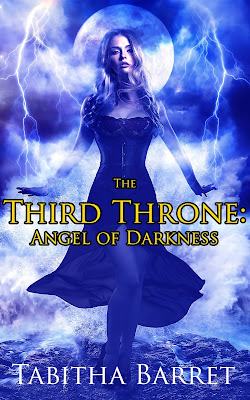 Where were you born, and what was it like growing up there?

I was created in Heaven, though I am not an angel but an immortal. I am the Bringer of the Apocalypse. Unfortunately, I don't remember what it was like in Heaven since my memories have been bound. I am told that I didn't fit in very well. The other angels feared me or hated me because I am destined to end the world.

Who is your enemy? What makes you enemies?

Lord Hades, Lord Lucifer's second-in-command in Hell, was not a fan of me when I first arrived in Hell. He thought that I was cause all sorts of problems and ultimately destroy Hell. He attacked me, but I assure you, he will think twice about doing that again.


Unfortunately, I have many enemies, most of whom I have never met. There are many creatures who would use my power to destroy the Mortal Realm, or Heaven. There are times when I fear that Lord Lucifer will try to use me to destroy Hell so that there won't be any more evil mortals left to punish and he can return home to Heaven.

Do you have a close relationship with your family?

The person that I am closest to is my father the Archangel Gabriel. God created me from a piece of him. He is my guardian and has done his best to protect me from those wishing to use my power for evil purposed. He has also kept me safe from the Council in Heaven who sometimes fear my power. I have made mistakes in the past and have released my power before it was time. Gabriel has never been angry with me or judged me for my mistakes. I love him dearly.

What was the most embarrassing moment in your life?

Waking up at Lord Lucifer's feet in Hell and being told that I was now his servant was the worst moment of my life. He handed me a black dress and expected me to change in front of him. I was mortified and angry. I call it the slave girl outfit. Anyone who saw the revealing dress would know that I belonged to Lord Lucifer. It was horrible.

What are your goals? What would you like to achieve?

It is my destiny to end the world, but to do that I need to find my ten Harbingers, or Predznak. They are the angels who will tempt the mortals and offer them a choice between being good or bad, so that they may end up in Heaven or Hell. There is no Purgatory during an Apocalypse, so they have to choose their fate. Unfortunately, I was separated from my angels and they have waited for me for too long. They are angry with me and hiding in the Mortal Realm. Most of them are tempting the mortals to commit acts of evil instead of offering them a choice. I must find them and convince them to join with me, with their Master.

I must find the Angels of the Apocalypse: Death, Vengeance, Fear, Distrust, Illness, Desire, Anger, Agony, Deception, and Hunger. Once I accomplish that impossible task, I will have to determine when it is time to end the world. I really hope it never comes to that, but I have a feeling that I won't have a choice.

What is the strangest situation you've ever found yourself in?

When I entered Hell, Lord Lucifer had lied to me about who I was and what I was meant to do. An angel called Mark tried to tell me the truth, but I didn't believe him. You have to understand, the life that I knew was a lie. I thought I was a normal woman, not some immortal being. I thought that I had two parents and a supportive uncle. Mark told me that if I wanted to learn the truth about myself, I had to go to the Caves of Darkness on the edge of Hell. I thought he was crazy, but I finally decided to slip away from Lord Lucifer and find out the truth. I was met by horrifying creatures called Shades who are the soulless animated corpses of the escaped prisoners of Hell. They feed on other souls and wanted to make a meal out of me. I had no way of defending myself from their attack. Before I knew what was happening my Uncle Bob pulled me away from horde and proceeded to explain the truth to me. Let me tell you, I thought the Shades were scary, but hearing the truth about myself and my destiny was far scarier.

Where is the best place to visit in your world? What places should visitors avoid?

Since I reside in Hell, the best to visit would be the Hall of Mirrors in the Castle of Tears. It's my person sanctuary away from all the craziness. It's probably the safest place to be since I'm the only kind and sane person in Hell. Other than that, the Hall of Winds would be the a great place to visit since it leads to Heaven, Purgatory, or the Mortal Realm.

I would suggest avoiding the following places in Hell:
What do you own that would be hardest to part with? Why?

The item that I can't part with is my ring. It's a red gem with a slash of black in the middle attached to a silver band. I'm told that it is called the Eye of Sirrush. I've had it since I was a child and I adore it. It was given to me by my father. What I didn't know is that it binds my power. I hold the power of natural disasters inside of me and it keeps my power in check. Without it, my power is very difficult to control. It sometimes gets away from me and small towns or entire civilizations will be eliminated in a matter of minutes. I don't know what I would do if I lost it.

Name some of your bad habits.

My worse habit is my tendency to lose my temper which causes my power to escape. Bad things happen when I lose my temper. I create devastating storms, freeze things, set things on fire, and drown things in floods. I try to keep calm, but I don't react well to people trying to hurt me or kill me.

If you could change something about yourself, what would it be? Why?

If I could change something, I would probably change my destiny. I don't want to end the world. It's not something I volunteered to do. I was created to do it. I know that one day I will have the blood of the mortals on my hands and there is nothing I can do about. I would probably choose to be another other than the Bringer of the Apocalypse.

Would you ever or have you ever lied? How do you feel about lying?

Lying is a sin and I typically don't react well to people who commit sins. Sinners will ultimately cause me to end the world and because of that, I can usually tell when someone is lying to me.
The first time I interacted with Lord Hades, he told me all sorts of lies. Something deep down told me that couldn't trust him. The ring on my hand started digging into me and I knew Hades was lying to me, but I didn't know why.

As the Bringer of the Apocalypse, I am the Angel of Deception's Master. It is a temptation to lie to people, so I understand how to deceive someone. Thought I don't like to lie and deceive others, there are times when it is a necessary evil when dealing with my enemies. I'm told that I am very convincing when I intentionally lie, though it's not something I like doing often.
Posted by Renee Scattergood at 2:00 pm