P. R. Principe has served on active duty as a commissioned U.S. Air Force officer and has lived in Italy, France, and the United States. In between writing and contemplating civilization's collapse, he spent time in Glastonbury, England, learning to forge a broadsword, and obtained his amateur radio license. 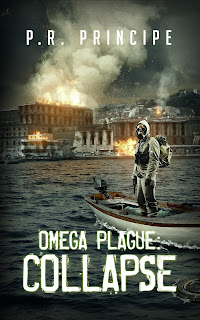 
An airborne strain of the AIDS virus decimates humanity. Bruno Ricasso, an Italian cop, a Carabiniere, struggles to survive on the island of Capri while Europe erupts in flames and society crumbles. But when his solitary existence is broken, Bruno returns to the empty city of Naples in search of answers.

Can Bruno find a way to stay alive in the ruins of civilization? Or will Bruno's past sins prove even more deadly than the Omega Plague?


An Interview with the Author

Why did you decide to be a writer?


I thought it would be a fine accomplishment just to write a novel, like running a marathon, but I never dreamed I would actually ever finish it, writing it at night, here and there. Though I've written on various subjects as part of my “day” jobs over the years, I haven’t done any creative writing since I was in grade school. For me, it's milestone, and I’m pleased just to have it finally done.


I’ve read quite a bit of post-apocalyptic fiction over the years, but a colleague of mine who read Omega Plague: Collapse told me it was like The Road meets Earth Abides. They are two great books, and if those are my influences, then that’s great. Also, A Canticle for Leibowitz and Alas, Babylon. Nothing like some nuclear hellfire and brimstone to liven up the Apocalypse! In particular, something about the nature of A Canticle for Leibowitz speaks to me. In some ways, its epic scope is reminiscent of Tolkein as he too describes the rise and fall of societies over thousands of years of history.


Hmm. So many fine authors to choose from, but most of all, I would loved to have met J.R.R. Tolkein. He knew how to make a world, not just craft a story.


As soon as I uploaded the ebook to Amazon.com this past July!


I'd definitely want some practical books, something like The S.A.S. Survival Handbook by John "Lofty" Wiseman and When All Hell Breaks Loose by Cody Lundin, so I could make sure I had some survival tips! Then I'd want the Lord of the Rings and the Silmarillion. Reading them takes a long time, which is good if one is stuck on a deserted island!

What book or series do you enjoy reading over and over again?


I could read the Lord of the Rings again and again. I'd better like it, since I'd take it on a deserted island with me! Also, the Shannara series by Terry Brooks. I admire authors who write good high fantasy, since I think it is such a tough genre in which to write. I think that both series have a touch (and with Shannara more than a touch!) of the post-apocalyptic to them. Probably explains why I like them!

What made you decide to self-publish?


I really didn't want to be bothered with the whole process of submitting queries. Of course, a publishing house takes care of editing expenses, cover art, etc, but beyond that, I don't think that traditional publishers do much beyond getting a physical book on the shelves of bookstores. How much marketing do they really do for authors that aren't on their "A" list? I also decided that I wanted to have total control of the process, from choosing the editor to the cover designer.


Wait until everyone else is asleep, pour a glass of wine, and start typing on the computer. Sometimes I'll listen to classical music, sometimes ambient music; other times dark ambient music, for that post-apocalyptic vibe.


I'm a pretty much a total "pantser." I don't have an outline, other than a general idea of where the story is going. Sometimes I have a very clear idea for a scene or chapter. But many times, I’ll just write and see where it leads. If I get an idea for a scene/character, I have a running list of notes at the end of the transcript.


Omega Plague: Collapse took about four years, since I only write at night. Another reason it took so long was that I envision the story as I go, so I make changes on the fly. Hopefully it makes for a dynamic story. But I also think it takes longer to write that way.


Someone I know from a previous job wrote a review on Amazon wondering if the main character was really my alter-ego. I can say categorically he is not, since, while I wrote the book, I had in mind the actor I thought could play him! But I don't think there is any question authors do put some of themselves into the characters. I'd also say that some of the characters are have bits, here and there, of people I've known.


Started the sequel. I hope it doesn't take me another four years!


Even when I have time, actually finding the discipline to sit down and write is quite painful. There are always a million other things to do, and they all seem easier than writing!

Do you have any advice for other authors?


People have come to me and said they have ideas for a story, but don't know how to start. I think the answer is simply: start writing. Don't wait for inspiration. Trust that ideas will come as you are writing. If you wait for inspiration, you might wait forever.
Posted by Renee Scattergood at 2:00 pm