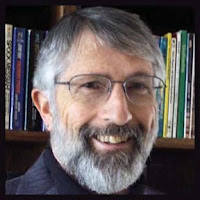 RJ Mirabal has lived in the Middle Rio Grande Valley for most of his life. Recognized with awards for his teaching, RJ taught high school English, speech, drama and computer literacy. Now retired, he purses writing and music while volunteering with various organizations. RJ enjoys exploring New Mexico’s wilderness on his four-wheeler and traveling with his wife, Cheryl.

The Tower of Il Serrohe (Finalist in 2013 New Mexico/Arizona Book Awards) is his debut novel and Book I of The Rio Grande Parallax series. The newly released, Extreme Dust Storms May Exist is Book II while Book III will conclude the series in 2016. 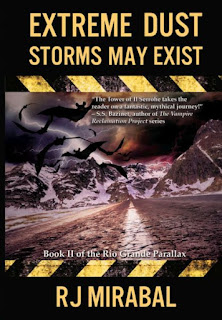 
It is five years after the final events of The Tower of Il Serrohe and Esther, a sixteen-year-old honor student and athlete, suffers a mysterious accident and dreams of a valley much like her Rio Luna home, yet ominously different. Next, a bat repeatedly slammed its body against her window during a powerful wind storm. And then there came a whispering in the darkness.

Soon, she discovers the whispering comes from the bat, Nightwing, who used his wiles to persuade Don, Esther’s older cousin who been missing for years. Nightwing tells her of the Valle Abajo clans and the evil Soreyes who have returned to terrorize the Valle Abajo—the valley of Esther’s dreams. As she shares these disturbing details with her best friend, Markey, they both worry Esther is going insane.

Now Nightwing must persuade Esther to take on a new quest using her intelligence and resourcefulness to drive away the Soreyes. However, new dangers threaten when word reaches the Valle of a murderous clan in the far away Mountains of Sky east of the Valle while in the west there lives another band of Soreyes.

As Esther considers these challenges, a mysterious presence makes itself known as the saga of the Rio Grande Parallax continues.

Get it today on Black Rose Writing, Amazon, Barnes and Noble, and Smashwords!


Keep reading for a guest post from the author:


I’ve always loved the way fantasy and science fiction take my imagination beyond the ordinary. Realizing the obsessive creation of stories in my head meant I should be a writer, I set out to fashion a unique niche for my musings calling it Southwest Contemporary Fantasy, specifically New Mexico fantasy. My series, The Rio Grande Parallax, introduces my twist on epic fantasy. Thus Don, Nersite, Raquela, Esther, and all the other characters were born and sent out on their unpredictable adventures.

But like many children, they have their own ideas, and I struggle to keep up with them, attempting to tell their story as accurately as I can. I admit they share some of my life experience growing up in New Mexico with its unique culture, terrain, and climate. But at times, I wonder where these people came from! Join me as I chronicle their adventures and challenges.

Some of my characters are obviously fantasy, but based on interesting human peculiarities of most every person I’ve ever met. Even Don, though a regular human, is not based on any one person, but a collection of individuals I’ve known and other characters I’ve encountered in literature. I’ve tried hard to “test” my characters—even the fantasy ones—against reality so that I hope readers will find them believable given the setting and plot I’ve created.

In "Extreme Dust Storms May Exist," Book II of my series, my main goal was to introduce teenage characters because their earnestness, naiveté, and idealism adds elements that weren't fully explored in the first book. I believe Esther and her friend, Markey, offer a refreshing contrast to Don's cynicism. Esther is bright and enthusiastic but not yet fully prepared to take on the serious challenges of the conflict in the Valle Abajo. She learns a lot in this adventure.

One of the larger social issues in my work is that people tend to put themselves in little groups and the groups come into conflict with each other. I think people from different cultures are a bit suspicious of each other. The clans in the book have some elements of New Mexico, but they are also universal; they could be from any part of the world.

The message of this series is: “All of what we perceive to be reality is a function of our perception which is informed by our normal senses and our emotional and philosophical states of being.” And, as always: evil is bad, kindness is good, and love is essential to life. Finally, I have no big agenda other than entertaining my readers who will share in my imagination as they read the book.
Posted by Renee Scattergood at 2:00 pm