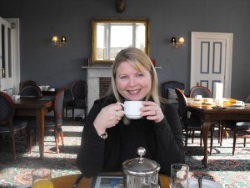 Amy Rose Bennett has always wanted to be a writer for as long as she can remember. An avid reader with a particular love for historical romance, it seemed only natural to write stories in her favorite genre. She has a passion for creating emotion-packed—and sometimes a little racy—stories set in the Georgian and Regency periods. Of course, her strong-willed heroines and rakish heroes always find their happily ever after.

Amy is happily married to her own Alpha male hero, has two beautiful daughters, and a rather loopy Rhodesian Ridgeback. She has been a speech pathologist for many years but is currently devoting her time to her one other true calling—writing romance. 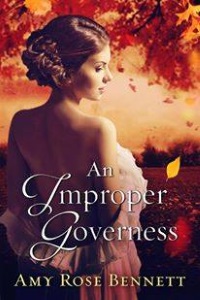 
Lusting after one’s employer is certainly not the done thing when you are a governess. But Miss Abigail Adams cannot seem to help herself...

Abigail Adams, the resident governess of Hartfield Hall, might appear to be a very proper young woman, yet she secretly yearns for excitement to brighten her mundane life. And what she does want, she really shouldn’t long for—Sir Nicholas Barsby, the indecently handsome, charismatic master of Hartfield.

Sir Nicholas Barsby returns home from a tour of the Continent to discover his widowed sister-in-law has employed a decidedly delectable governess for his nieces. When it becomes blatantly apparent that the attraction is mutual, Nicholas ruthlessly decides to present Miss Adams with a thoroughly wicked proposal.

Abigail is initially shocked by Sir Nicholas’s outrageous and highly improper offer to become his mistress. Having wanton thoughts about a man is undoubtedly sinful but leading the life of a fallen woman is something else entirely. Nevertheless, falling into Sir Nicholas’s arms might just prove to be an invitation too tempting for Abigail to ignore. One thing is clear, whether she’s a governess or mistress, she must not lose her heart...


Keep reading for an excerpt and special giveaway:


By the time she reached the stile, Abigail was gasping like a landed carp. As she gathered her skirts preparing to climb over, thunder clapped so close, she shrieked. A bright bolt of lightning lit the air around her and she swore she could feel her hair stand on end. Ignoring all dictates of decorum, she hoisted her skirts even higher and clambered up and over the rough wooden steps. However, as she jumped down, the muslin snagged on something and she found she was tethered like a nanny goat, her skirts caught up about her waist.

“Damn!” Without thought, the coarse expletive escaped her. Not only was she about to get caught in a storm she’d probably ruined her best day gown. Could this day get any worse?

It seemed it could.

Abigail whipped her head around and found herself staring up into the face of the most handsome man she had ever seen. Raven-haired with slashing brows and chiseled features, he sat astride a glossy black gelding with the confidence of a knight-errant, but alas, not the gallantry. As his deep blue eyes raked over her naked thighs and lower to her stockings, his expression was a mixture of sardonic amusement and a darker, heavier emotion she had no trouble recognizing at all—male lust.

“May I be of assistance, dear lady?” he asked, his voice a rich rumbling purr.

Abigail’s face burned as she attempted to wrench her dress and fine cambric petticoats down all by herself. The distinct rip of fabric tearing made her wince. “You might avert your gaze, sir,” she snapped as hot outrage and mortification made her sound more like a harpy than a damsel in distress.

“Yes, I might. But then, that would not be of much help to you now, would it?” Before Abigail could even think to protest further, the ill-mannered stranger slid from his mount and within moments, had released the stubborn snag.

“There,” he said with a wide smile that was probably supposed to be rakishly appealing. “The fair maiden is free.”

“I could have managed on my own,” she retorted. She wasn’t going to thank the man, not when he’d been eyeing her lower body like a hungry beast of prey sizing up its next meal. Dear God, I hope he did not see my bottom, or worse, my—

Another crack of thunder made her start and the man glanced at the menacing sky. Lightning streaked above the dense copse of trees hiding Hartfield Hall from view. As he mounted his restive horse, a sharp gust caught his black traveling cloak and it flapped about him like the dark wings of a fallen angel.

Perhaps even Lucifer himself. “Where are you going, Miss...?” he asked, his compelling blue gaze locking with hers again. “I really don’t think you should be wandering about the countryside in this tempest. In fact, it would be quite foolish if not altogether mad. I must insist you come with me.” He held out his gloved hand.