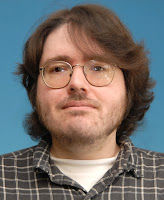 Paul Briggs learned to read and write when he was two, about the same time he learned to talk. He then spent the next twenty years learning that most people don't talk the same way they write.

He lives in Maryland, has a master's degree in journalism, worked for a daily paper for 12 years and is also an editor, proofreader and ghostwriter. He is the author of several short plays, including the award-winning "The Worst Super Power Ever" and "The Picture of Health."

In his spare time he is a stage actor.

Connect with Paul on Goodreads!


In the second book of the Locksmith Trilogy, 12-year-old Lachlan Smith and his family and friends travel back and forth between the present and the future in hopes of preventing the extinction of the human race. It becomes increasingly clear that they will need help if they're to succeed — but who do they turn to for help? And how can they do this while keeping the time portal a secret?


“I know this is going to sound like a dumb question,” said Tara, “but… if we were actually going to solve this mystery and save the world… why can’t we just look in the future and see how we did it?”

“Nothing wrong with the question,” said Gary, “but the answer is, it doesn’t work like that.”

“Yeah, why not?” said Brandon.

Gary looked a little embarrassed. “I haven’t had much luck explaining this stuff to people,” he said. “I’m not sure if I can help you understand.”

“Can I make a suggestion?” said Lock.

“This time, try leaving the cat out of it. It doesn’t help.”

“Okay. Give me just a minute. Let me think.”

They waited. After a long moment, Gary spoke again.

“If you think about it,” he said, “we see into the future all the time. When you walk down the street, or ride your bike, you look ahead, and you’re seeing where you’re going to be a few seconds from now.”

“Time and space are all part of the same thing,” said Gary. “Like, the event horizon of a black hole is where time and space rotate into each other. That’s why nothing can get out — once you’re in, the past becomes up and the future becomes down.”

“I thought it was because there was… too much gravity down there or something,” said Lock.

“That’s another way of saying the same thing,” said Gary. “Wait… is any of this making sense?”

The rest of them shook their heads.

“Okay,” said Gary. “My point is… suppose you’re riding your bike and you see a pothole in the street up ahead, right where you’re about to go. You don’t just go ahead and hit it, right?”

“Right. And when you move, it’s not in front of you any more. You’re not going to hit it. It hasn’t disappeared — it’s still real — but your worldline doesn’t intersect with it anywhere. And if you were never going to go down that stretch of road again…”

“Yeah, but if you’re on a bike, you can stop or turn around,” said Tara. “You can’t stop going forward in time.”

“But you can still steer,” said Gary. “We do it all the time — we just don’t realize we’re doing it. Philosophers call it ‘free will’ only they’re not sure if it exists or not. But what Lock and I found out is, you can change the future. But you can’t go to the future and see the changes you make until after the point where you’ve already made them in the present. Does that make sense?”

There was a long pause.

“So… the end of the world is… like… a really big pothole?” said Brandon.
Posted by Renee Scattergood at 2:00 pm