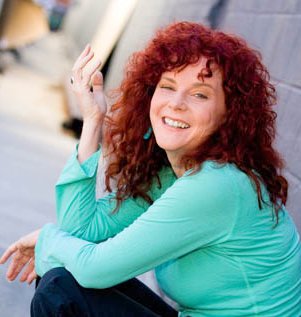 Kim Alexander grew up in the wilds of Long Island, NY and slowly drifted south until she reached Key West. After spending ten rum-soaked years DJing in the Keys, she moved to Washington DC, where she lives with two cats, an angry fish, and her extremely patient husband. She began writing when she ran out of authors to interview (and they pulled the plug on her channel, Sirius XM Book Radio.)

Kim was in her twenties when she finally read a book not prominently featuring spaceships and/or wizards. Turns out Jane Austen was pretty funny!
THE HERON PRINCE continues the story of Rhuun and Lelet in the worlds of Mistra and Eriis and is the second in the fantasy series called THE DEMON DOOR. Her husband tells her she needs to write at least ten more books if she intends to retire in Thailand, so thank you for your patronage. 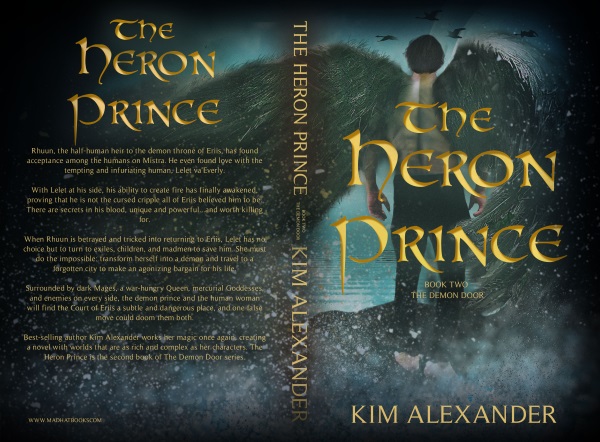 The Demon Door can be opened...but the price is deadly.

Rhuun, the half-human heir to the demon throne of Eriis, has found acceptance among the humans on Mistra. He even found love with the tempting and infuriating human, Lelet va’Everly.

With Lelet at his side, his ability to create fire has finally awakened, proving that he is not the cursed cripple all of Eriis believed him to be. There are secrets in his blood, unique and powerful...and worth killing for.

When Rhuun is betrayed and tricked into returning to Eriis, Lelet has no choice but to turn to exiles, children, and madmen to save him. She must do the impossible: transform herself into a demon and travel to a forgotten city to make an agonizing bargain for his life.

Surrounded by dark Mages, a war-hungry Queen, mercurial Goddesses, and enemies on every side, the demon prince and the human woman will find the Court of Eriis a subtle and dangerous place, and one false move could doom them both.

Best-selling author Kim Alexander works her magic once again, creating a novel with worlds that are as rich and complex as her characters. The Heron Prince is the second book of The Demon Door series.


Keep reading for a guest post from the author:

What was it like to write the sequel to The Sand Prince?


In some ways it was easier. My series follows the adventures of a cast of almost 40 characters across two very different worlds, and a lot of that groundwork got covered in the first book. We know Eriis is a desert wasteland recovering from a devastating war. We know the demons who live there have powers humans consider magical. And we know the humans of Mistra have almost completely forgotten the enemy they almost wiped out 100 years ago.

It was harder for some of the same reasons. When you have a large cast you have to know what everyone is doing, what they know, who told them, why they are where they are, how they got there and where they wind up! It’s like herding cats, if cats were bad tempered (sexy) demon princes and infuriating (also sexy) human women.

The fun and challenging part for me was exploring the characters who played a more minor role in book one. In particular, Rhuun (the bad tempered demon prince) has an ex-girlfriend back home on Eriis, and she got the short end of the stick (so to speak) when he went through The Door to Mistra. In book two, she faces her phobias and does some exploring of her own. And we spend some time with Rhuun’s arch mortal enemy, Niico, and find out why he behaves the way he does. Meanwhile, back among the humans, we’ll be seeing more of Lelet’s older sister May, and her youngest sister Scilla (evil genius in training--she’s only 12!)

I also loved giving Lelet herself a chance to save day (more than once) and find her strength. And Rhuun begins to see there’s more to him than he ever thought.

Of course I put everyone through the wringer--this is only book two!
Posted by Renee Scattergood at 2:00 pm