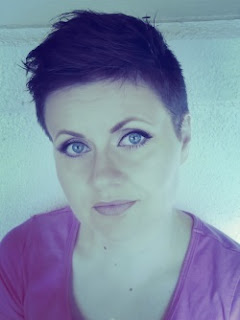 S. M. Sevón is a technical writer and translator who for the past few years has been a working-at-home-mom of two, living with her part Danish family in the heart of Finland. Her career as a writer of fiction already spans two decades, but "They Wait in the Woods" is her first official publication. The story of the book is continued in her second novel, "What Human Remains". 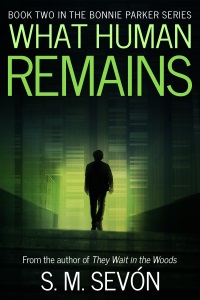 Man is the cruelest animal.

Bonnie Parker has been through living hell. Having lost her friends and the life she knew to the horrors of the River Valley Dam, she is trying to come to terms with what she has become.

But the past is already back to haunt her.

Chased by shadows that seem to follow her every move she finds herself a prisoner of those who claim to help her. Trapped in a nightmare of ruthless experiments, she soon discovers that humans are far worse than the monsters they are hunting.

In order to survive, she must put her trust in the man who has tried to kill her—twice.


What is your writing process?


The first draft of almost any book is written almost completely as it flows, very train-of-thought, and then the following drafts are more structured, better considered, edited, re-edited, dissected etc. until there is a copy that can be called a 'final draft'. Proportionally speaking, the initial draft doesn't take all that much time. It's the edited and re-written versions that follow that take the most time.

Do you write in first or third person, past or present tense?


I write in third person, past tense. It feels the most natural to me and I also prefer it in the books I read.


Both. I'd love to be more spontaneous, but I do have to get very structural at times, especially since I am writing a book series. My flowcharts are legendary by now.


On average, a couple of years per book. My work does overlap, though, so I may be working on two books at the same time.

How do you come up with the titles for your books?


The titles of my books are the result of endless brainstorming sessions.

Do you find it difficult?


Yes, coming up with a good title is hard work!


Both. My writing is a mix of things that I know and that are real and things that I have either come up with or have taken an artistic license with. I also spend a lot of time on background work, studying new things or just deepening my knowledge on things I already know about whether professionally or just because of personal interests.


Not directly, no, however, there are moments in the books that reflect real life.


I am currently working on the third book in the Bonnie Parker series.

What inspired your current work?


I originally wanted to write a paranormal suspense story that would deal with familiar themes in a new, perhaps more minimalist way. I wanted to create a story that was both classy and believable, creating an "it could happen" feeling for the reader, as well as exciting, entertaining and creepy in just the right places without gratuitous gore.

I wasn't supposed to write a book series, but when I finished my first book, "They Wait in the Woods" I had this strong feeling that my characters weren't done telling their story and so I decided to continue with them even though I was suppose to start a completely different project. Considering that I am now writing the third book in the series, I suppose I was right. I have this feeling I've just gotten started!


Keeping all the plot bunnies under control and bringing it all together through the entire series so far - with later volumes in mind.
Posted by Renee Scattergood at 2:00 pm