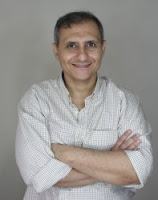 Khaled Talib is a former journalist with local and international exposure. His articles have been published and syndicated to newspapers worldwide, and his short stories have appeared in literary journals and magazines.

The author, who resides in Singapore, is a member of the Crime Writers Association and the International Thriller Writers.

His debut, Smokescreen, was listed as one of the six "boundary-breaking indies" by the IndieReader while his second novel Incognito won the Silver Award for the AuthorsDB Book Cover Contest 2017.

Get a Free Book! 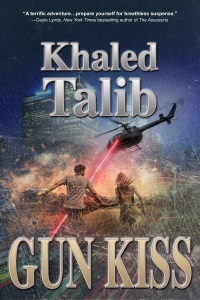 
When the Deringer pistol that shot Abraham Lincoln is stolen and ends up in the hands of a Russian military general, covert agent Blake Deco is tasked by the FBI to head to the Balkans to recover the historical weapon. Meanwhile, the United States media is abuzz with news of the mysterious disappearance of Hollywood movie star, Goldie St. Helen.

After Blake’s return from overseas, he receives a tip from a Mexican friend that a drug lord, obsessed with the beautiful actress, is holding her captive in Tijuana. With the help of a reluctant army friend, Blake mounts a daring rescue. What he doesn’t expect is to have feelings for Goldie—or that a killer is hunting them.

Keep reading for an excerpt:


The tall buildings around Washington, D.C.’s 10th Street overshadowed the historic Ford’s Theatre. Though the building had undergone refurbishment both inside and out, it still seemed slightly out of place in modern America. However, that didn’t stop the throngs of tourists visiting the building that June morning as wispy clouds threaded through the cerulean sky.

It was a crowded weekend day when Abraham Lincoln, in his overcoat, and two Union soldiers, their faces covered with bandanas, stepped out of the van. They meandered past the theater’s five historic doorways toward the modern glass entrance. Everyone assumed they were part of a promotion taking place at the museum. It was not uncommon to see park rangers and tour guides dressed in period costumes.

The man behind the Lincoln mask was Rick Walker—at least, that was the name he was currently going by. Highly educated, the thirty-six-year-old professional thief had a penchant for the fast life. If the assignment was a success today, he’d promised his girlfriend a nice holiday.

Two female park rangers stepped forward when Rick and his companions reached the front of the line.

“You have to get in line, sir. Also, you need to get tickets. Kindly remove the mask and bandanas before entering,” one of the park rangers said.

“That’s the only way you’re going to get in,” the park ranger said.

“Well, if you insist, madam, and once again, please accept my apologies.” Rick bowed and tipped his hat, then extended a hand to the park ranger, who instinctively took it.

Rick grabbed her wrist tightly and locked it to his own with a steel cuff.

“What are you doing?” the park ranger yelled, trying to jerk her hand away.

The park ranger reached for the walkie-talkie strapped to her belt, but Rick snatched it away from her. Frantically, she turned to the other park ranger. “Get security!”

One of the two Union soldiers dropped his prop rifle and grabbed the other park ranger’s hand, then cuffed her wrist to his own. He pulled out a real gun tucked under his waistband and aimed it at her.

Rick unbuttoned the jacket of his three-piece suit and brandished the bomb strapped to his chest.

“Bomb! Bomb!” a young teenager in the line shrieked.

Pandemonium broke out as the screams of panic amplified. People ran in every direction. Those who moved slowly were slammed aside, or knocked over.

Rick pulled the ranger cuffed to him aside. “We’re going downstairs, and we’re going to take the Deringer. Obey your president,” he said in a hollow voice.

“Yes, sir,” the park ranger said as beads of sweat formed on her forehead.
Posted by Renee Scattergood at 3:00 pm